CBRM Solar Power Plan Could Transform Region and Save Millions

According to the 2019 CBRM Viability Study, three of the biggest challenges facing the municipality are:

All three of these issues can be addressed with just one solution: Renewable Energy. CBRM has an opportunity to take a global leadership role in the renewable-energy sector. I propose that CBRM must set attainable targets for renewable energy. The Federal and Provincial governments have made programs and funding available to aid in this transition. With vision and planning, this initiative will benefit all of Cape Breton for generations to come.

The Argument for Solar PV

Solar panels (photovoltaic, or PV for short) have long been dismissed and maligned. Dissenters will claim they don’t work in northern latitudes, or they’re too expensive, or they’re toxic to produce.

In terms of cost per kWh (kilowatt hour) Solar PV is the cheapest source of electricity available:

Regarding toxicity, to put things in perspective, the environmental impact of manufacturing solar PV panels is dwarfed by the catastrophic side effects of fossil fuels, hydro damns, nuclear waste. The panels will be in service for several decades, after which they are 85% recyclable.

The Economics of Solar Power in CBRM

Before we go any further, let’s lay out some basic facts:

If you’re like me, you don’t have $20,000 under your mattress so you will probably have to finance the system. Worst-case scenario – if your loan payment is roughly the same as your power bill – the system will be paid off in 12 years, but there are a number of ways you can dramatically reduce the length of the term and save considerable interest.

The graph below compares NSP bill payments to financing a solar PV system. The orange line represents a 12-year loan @ 2.8% APR with a monthly payment of $169. The blue line is your NSP power bill starting at $150/month with a 2.5% increase each year.

Right away you’ll notice that while the power bill (blue line) increases every year, the loan payments (orange line) stay the same. The NSP bill continues to increase long after the loan payments have stopped. The average household would save $37,916 over 25-years. And this doesn’t take into account the 4.1% higher resale value for solar powered homes, or that NSP will buy any extra electricity you produce (up to a limit).

If enough Cape Breton households make the switch to solar power, the economic benefits will be astounding. But several questions immediately come to mind:

The immediate benefit is employment. Solar PV systems must be installed by qualified, trained electricians. As demand increases, more trades people will be employed. Spin-off business opportunities will also open up for wholesaling, warehousing, and distribution of solar PV components.

Since this is a community-building initiative, it would make sense for the municipality to engage Credit Unions to develop lending programs geared toward solar PV customers.

The mid-term benefits will be seen as more and more homeowners pay off their solar PV system loans and have more disposable income, contributing to the local economy.

The long-term benefit is that CBRM becomes an attractive destination for entrepreneurs, innovators, and investors. The population grows, and the community is invigorated; Residents will enjoy a higher standard of living as CBRM becomes a model of success for other municipalities.

If 20% of CBRM homes (1 in 5) made the switch to solar PV electricity, the installations would immediately inject $100-120 million into the local economy. Over the 25-year service life of typical system, the CBRM economy would see a net gain of $340-million, just from power-bill savings alone.

These are the tangible, calculable numbers. It is impossible to predict the potential benefits from the resulting immigration and investment.

The Cost to Residents

It sounds absurd, ridiculous even, but there is no cost for residents. The whole point is to reduce their costs and save them money; to free up part of their income and improve living standards; to stir the local economy and put a dent in poverty. It’s a simple re-direction of resources; Rather than paying NSP for electricity, residents pay off a loan.

The municipality must be the proponent and the facilitator. There are a number of things that can be managed at the municipal level to make this a reality. In the beginning it will be difficult to get residents on board. Nova Scotia Power has been our sole provider of electricity for over a century – and we’ve never known another way. The municipality will have to promote and market the concept to residents.

Secondly, the municipality could improve buy-in by offering some form of incentive; Perhaps a property tax credit, or a low finance rate with Credit Unions. The municipality could also assist installers by negotiating bulk purchases from solar PV hardware providers – thereby further reducing costs for residents.

Third, the municipality could expedite the permit process, and waive permit fees for residential solar PV projects. They could also reach out to other, international municipal bodies for consultation and collaboration.

In March 2020, I made the switch. Solar PV panels on my roof now generate all the electricity my family needs. I rolled the cost of our system into our mortgage renewal – and in 9 years (or less) I will be enjoying free electricity.

If you’re curious about solar PV power for your home, please feel free to contact me. I’ve done a lot of research on the topic and am happy to share my experience with you! If you think this idea has merit, please SHARE it with your social networks and give me your vote! Thank you!

Here are some screenshots from the app to show the actual power yield of my system. This is August so far: 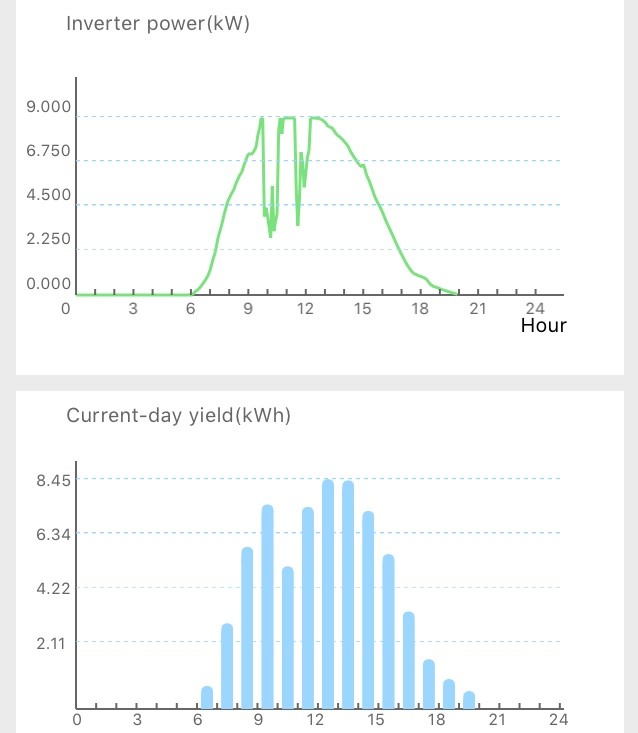 ... and the break-even calculations for my system:

3. 12-yr loan at 3.5% (obviously the interest rate is going to have an effect on break-even timing)

4. Projected PV production is based on historical data

1. NSP will increase rates by 2.5% per year - while the loan payment will not increase 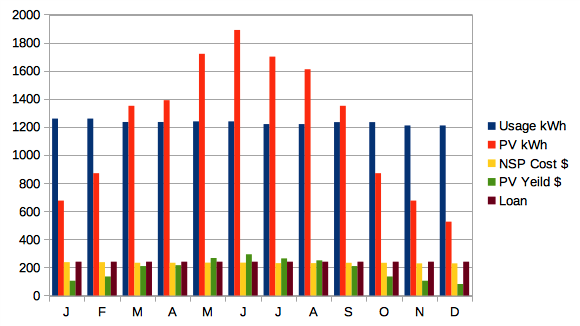 Posted by Glen Murrant
Share your news and events for free on goCapeBreton.com
SHOW ME HOW