The Glace Bay Colonels are gearing up for another little league baseball season. The team is ranked among the best in the nation, having won the Canadian Little League Championship five times, and has been runner-up on six occasions since 1982. Longtime manager and coach, Henry Boutilier, has about 40 years of experience as a bench boss.

He says the Colonels’ success comes down to two things — respect and community support. "It's an organization that's been here since 1952," says Henry. “It has a proud history and lots of support from parents and kids and many community volunteers who contributed their time and effort over the years to make us successful. The kids respect the program coming in, and they buy into it. They know what we're all about. We work hard and the community is with us."

When school is out, the 11 and 12-year olds train for six hours a day on the diamond in Table Head. Henry says that, although population decline has reduced the local talent pool, they are still able to contend for the national title. “It’s hard to find quality competition locally, so we have our players play against each other. I figure if our kids can hit our best pitchers, they can hit anybody. By the time we are ready to play for real, our pitchers and hitters have all kinds of confidence."

The Colonels won their first national championship in 1987.

Bobby Hooper, now living in Grand Prairie, AB, was one of the players who will never forget winning the title in Trail, BC. "We won in front of eight or ten thousand people out in BC,” says Bobby. “We gathered at the mound and it was just pure elation. It was such a thrill to know we were going to Pennsylvania for the World Series, and representing Canada coming from a small town like Glace Bay." 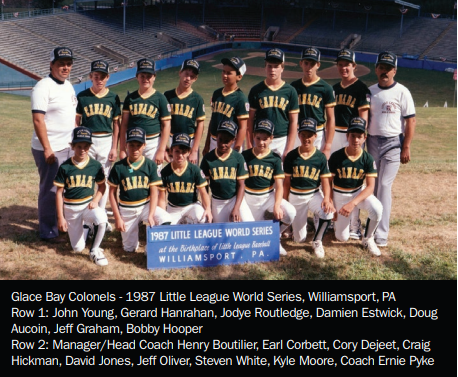 Both Henry and Bobby tip their caps to the coaches who devoted their time over the years, such as Henry's late brother Edison Boutilier, Jim Wilson, and Ernie Pyke. The pair has something else in common — passing down the love of baseball to their family. Henry hopes to coach his grandson Noel in a few years when he's old enough to suit up for the Colonels, and Bobby coaches his son Matthew's Mosquito team. 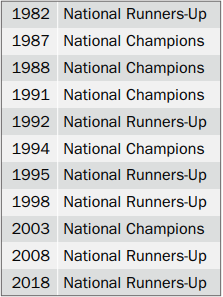