Above photo: Amiee and her coach Cyril MacDonald following the Austrian Special Olympics in March

Special Olympian Aimee Gordon of Sydney Mines says she’s still getting used to the idea of being a local celebrity. The 48-year-old speedskater won gold and silver medals in Austria at the Special Olympics in March. She received a hero’s welcome when she returned to Cape Breton Island, and the accolades continue.

“Everywhere I go, people want to hug me,” says Aimee. “I tell people’s it’s fun to be an Olympian and I tell people I like to hug them too.”

Aimee is one of Sydney Mines’ most adored residents. Her aunt Frances Gordon says she frequently receives invitations to attend community events and gatherings. Frances says Aimee will hardly ever say “no.”

“She truly enjoys being around people,” says Frances. “She loves meeting everyone who approaches her. Being in a parade is one of her favourite things to do. People always ask her what is it like to be an Olympian, and they also ask about the national tournaments she attended here in Canada too.”

Aimee says although she is proud of her athletic accomplishments, winning isn’t everything. “I made lot of friends during my competition,” says Aimee. “That was more important for me. I made many good friends.” 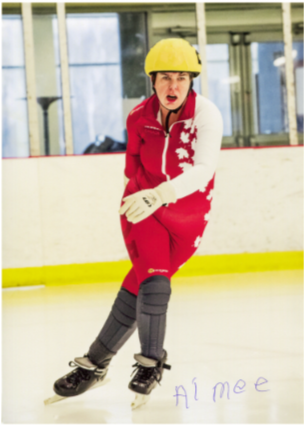 Amiee and her coach Cyril MacDonald