Tarabish is a card game that is popular in Cape Breton. It is played with a regular deck of playing cards, but with some of the cards removed.

The game is over when one or both teams accumulate 500 points or more. Points are counted at the end of each hand. Both teams always count their points and add to a running tally. The team with the most points at the end of the game wins.

A Tarabish deck consists of a normal deck of playing cards with the 2 through 5 of each suit removed (if playing with 4). In preparation for the hand, the dealer shuffles the cards in the usual manner. When finished, the person to the right of the dealer cuts the cards. The cut must leave at least four cards in each portion of the deck. Once the cards have been cut, no further shuffling is allowed.

The 36 Tarabish cards are dealt in groups of three beginning to the left of the dealer and proceeding clockwise until all the cards are passed out. The four players look at their first six cards prior to bidding. The last three, called the kitty, remain face down until after the bid is complete and a trump suit has been chosen.

When playing with 2 or 3 players, the 6 and 7 are also removed from the deck. In all cases, players are dealt 9 cards (6 to bid with, 3 in the kitty). Each player competes on their own and must score more points than any other one player. The game concludes when one or more players reach 500.

When dealing, one card is turned face up in the middle of the table after dealing the first 6 cards and before dealing the kitty. Players must first decide - in succession and starting to the left of the dealer - if they wish to make a bid based upon the suit of the upturned card. If not, the player says "pass" and the person to their left then has the option. If all 3 players pass on the upturned suit, the players (in succession) then have the option to make a bid on any of the other 3 suits remaining.

If all pass again, the hand is thrown in and the cards pass to the next dealer (unless the hand is forced).

Note: In 2 handed Tarabish, there are 9 cards that are not dealt and are therefore not in play. They are left hidden and face-down on the table. 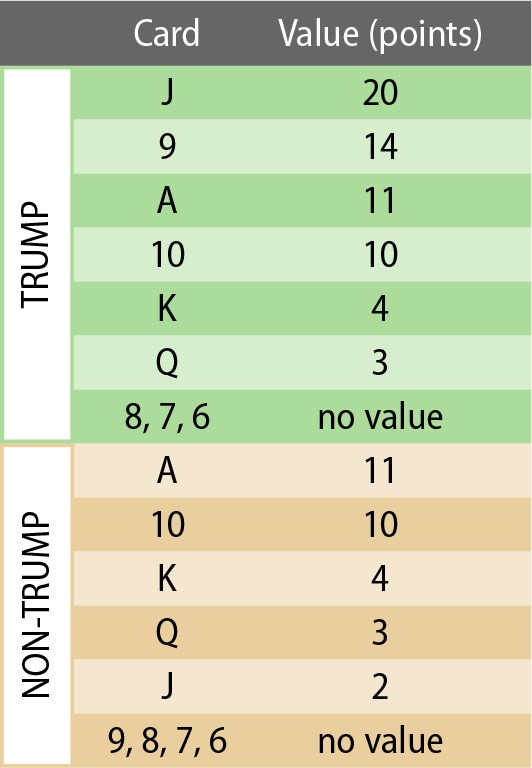 Any time you play a trump, you must play to beat any other trumps on the trick, if you can. The person with the highest card on the trick collects the cards and makes the first play for the next trick.

When you collect tricks, it is important to keep them neat, as they may need to be referred to in the event of a misplay.

Completed tricks must be kept face down. You may suspend play at any time and ask to see the last completed trick, but none before it. Once a trick is turned over it is considered complete.

Failure to comply with the rules outlined in the preceding sections is called a ‘’misplay.’’ If you suspect someone has misplayed, you can stop the hand by calling "misplay.’’ You must then prove it by examining the over-turned tricks and identifying the trick where the misplay occurred.

At any time a player may throw his cards and forfeit the points that have been played.

Upon completion of each hand, teams count the points of the cards in the tricks they have won. Base score for a hand is 162 points, if there are no runs (melds) or "Bella" in the hand. (See below.) This is derived from 62 points in trump values, 90 points in non trump values, and 10 points for taking the last trick.

The bidding team must score at least one more point than the opposing team (82 by default), otherwise they are considered bate and all points are awarded to the non-bidding team.

Bella (or Bells) is when a player has the King and Queen of the trump suit, and is worth an additional 20 points when called. The player MUST call bella when playing the last of the 2 cards to get the points. Common practice allows to instead call the first of the bells rather than the last. This is advantageous in remembering to call it, but gives others information about one's hand and may be detrimental in giving away points if going bate.

Official rules state that calling "first of bells" is table-talk and an automatic forfeiture of points since it is telling your partner of another guaranteed trump you have in your hand.

In the event that bella is part of a valid run, the player has the option to announce "Bella" when they show their run or wait until played.