The Sorcerers of Cheticamp [CB History] 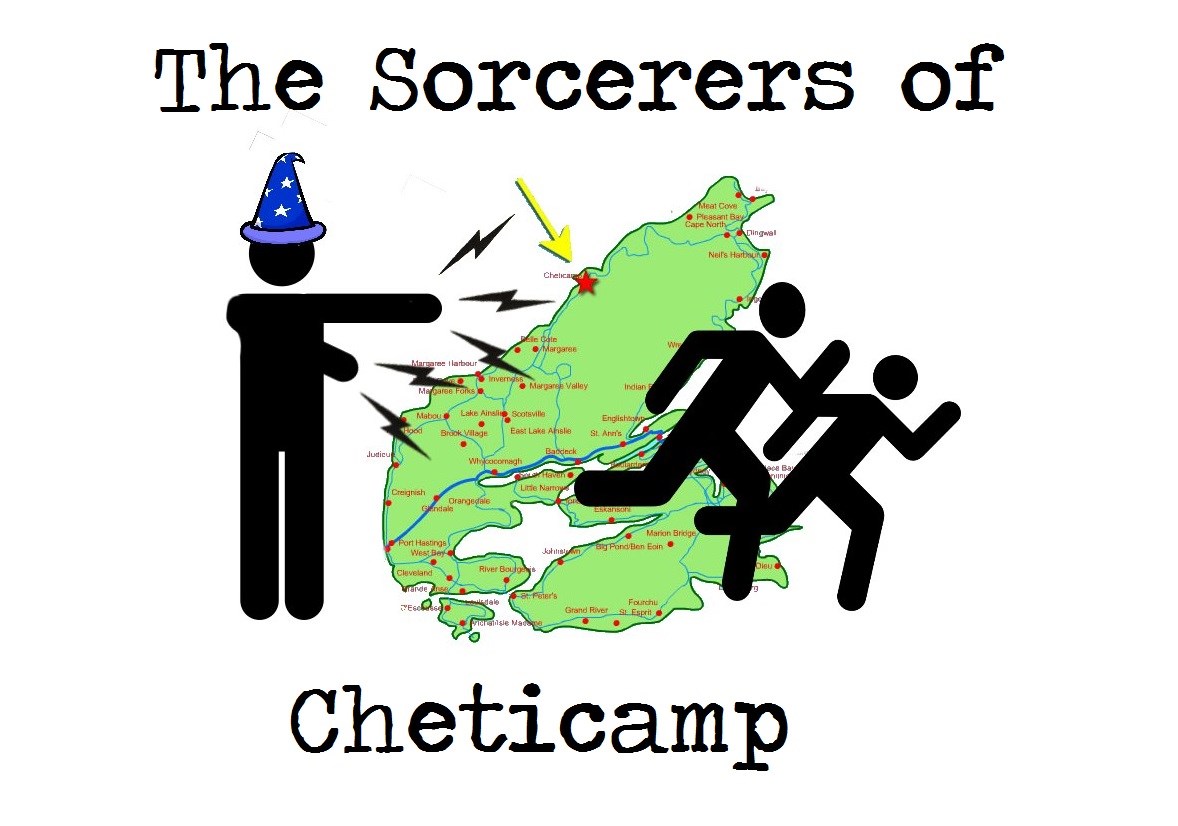 Cows, generally, do not dance. It's just not a very cow thing to do.

So you can imagine how alarming it was to Henrietta Aucoin when her cow, after producing four pails of blood from its udders, began to dance. Certainly the production of blood was no cause for celebration. Marie left the cow to its own devices until her husband, a fisherman, came home from the seas. The cow, still dancing, was sadly dispatched. Little did they know that the cause of the affliction was contagious, and soon after the cow's passing, the Aucoin's pig began to dance. This was also out of the ordinary, so the pig was killed too. Nobody danced after that.

The cause of this livestock choreography was obvious. Sorcery. The perpetrator? Gabriel a Goduc, the sorcerer Henrietta refused to give potatoes to the day before. The lesson was simple: When a sorcerer asks for potatoes, you give the sorcerer potatoes. 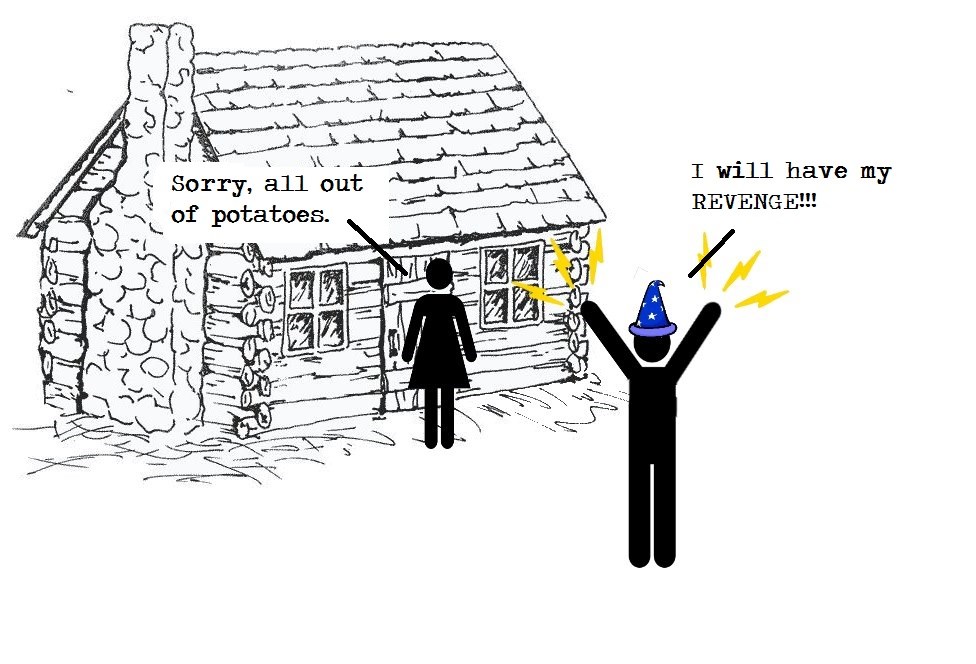 As you've probably guessed, this did not happen yesterday. This was the small town of Cheticamp in the late 19th century, and is far from the only example of troublesome sorcery afflicting the region at the time. Other notable examples include the inability to make butter, the falling off of ladders, and a young woman who took to acting like a cow. These were truly strange times in the village of Cheticamp.

The true reason for sudden uptick in sorcery in the small Acadian village? Long-term, ever growing mass-hysteria. Yes, it turns out Cheticamp had all the ingredients to create a low-hanging anxiety souffle, which manifested itself in ever-stranger acts of wizardry.

It all started with the arrival of the Jerseymen.

A Note on Jerseymen

Jerseymen, as I recently learned, are not from New Jersey. They are from the island of Jersey off the Northern coast of France. I made this handy graphic to remember:

One of these is where Bon Jovi and Skid Row are from. The other is a whole lot less ashamed.

The Jerseymen came to Cheticamp to find a lost colony of Acadians speaking a dialect of French last heard in the 1700's. They came to take advantage of the ample fishing grounds on the West coast of Cape Breton, and were surprised to find that few in Cheticamp were fishermen, which was strange indeed. Apparently fishing was just something the people of Cheticamp didn't do. They were farmers, which was especially strange because the land in Cheticamp is just not that great for farming, while the ocean was brimming with fish stocks. The Jerseymen promptly took control of the local fishing industry, became rich, and hired the Acadians to work all the mines and fishing grounds that used to belong to them.

The Acadians of Cheticamp had multiple reasons to distrust the Jerseymen. They spoke English, immediately took financial control of the whole town, and were Anglican, which the Catholics of Cheticamp referred to as "the other religion." It might as well have been voodoo to them.

So what do you do when an outside force invades your town, becomes the owners of industry, and begin dismantling your culture piece by piece, and in a completely lawful way? Well you accuse them of witchcraft, of course!

Why You've probably Never Heard of This 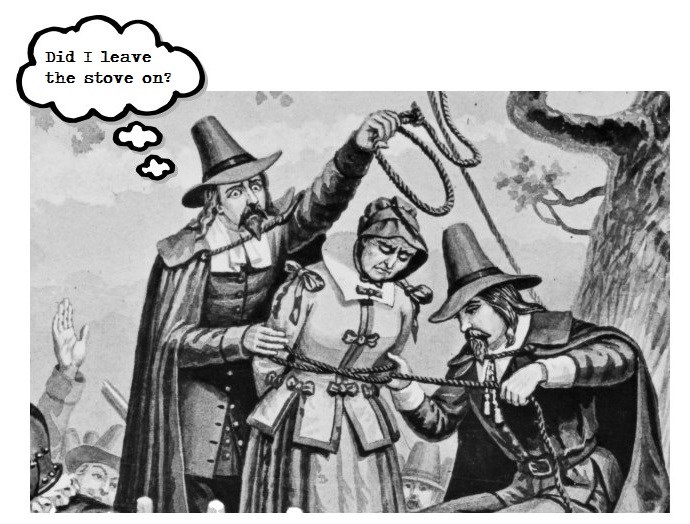 One Reason: This never happened in Cheticamp.

It's strange, right? People love tales of yore dealing with witchcraft and sorcery. The stories of the Salem witch trails still find themselves in high school classrooms to this day, and caused the deaths of twenty-five people. The lesser known German witch trails resulted in the mass execution of an estimated 900 people, and is just one of the things German historians are ashamed of. Altogether very juicy stuff.

So why don't you know about the Cheticamp sorcery scare? Well, it was pretty tame, comparatively. It turns out the warm Canadian tradition of neighborliness extends even into the realms of sorcery. One story of local wizardry had a man magically afflicted with a sore throat. He tracked down the sorcerer, told him to "Stop that!" and the throat was better the next day.

Cheticamp even had it's own Witch Trial, where a man was accused and successfully convicted of sorcery. Unfortunately, Nova Scotia had no official laws against sorcery, so they put the man on probation and told him to "not try anything like that again." What can we say? We're just not really into lynch-mobs.

But I'm getting ahead of myself. Back to the Jerseymen.

This is when the Jerseymen choose to not help matters one bit.

They wore sheets at night and scared the locals. They danced around people with lanterns walking home. They braided horse manes when they discovered the locals thought elves were doing it. The only explanation? The elves and sorcerers had formed a union and were plotting against the people of Cheticamp.

In one incident, Joseph A. Deveaux found his fine pipe missing. He was sure his Grandfather's brother, Gabriel had stolen it, so he went over to see him. He saw Gabriel smoking his pipe in the window, but when he entered the house, the pipe was gone. Did he hide the pipe? Did he throw it out the window? NOPE! Gabriel used his amazing sorcery powers to make the pipe disappear. It's the only explanation that made any sense.

The Power of the Cheticamp Sorcerers 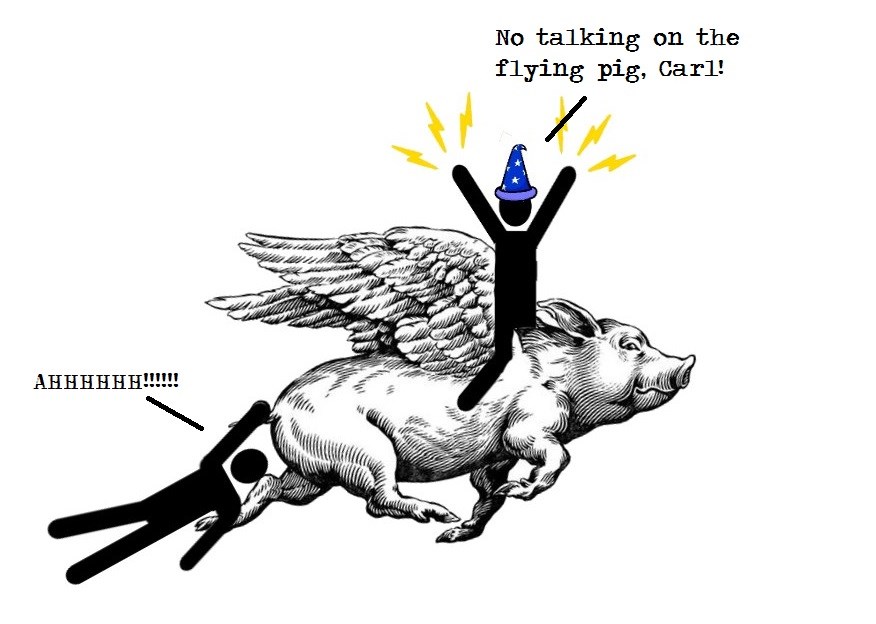 The best part of being a sorcerer for Lazare? Making up flying pig rules.

As you've seen so far, the powers of the Cheticamp sorcerers were sweeping and apparently random. It ranged from relatively benign spells like not being able to churn butter and falling off ladders, to more serious afflictions such as deafness, sickness, and making a kid stand in a corner on one foot for two days.

The last example is actually serious, because the kid grew up and was admitted to an insane asylum. He had clinical problems. Not cool.

Some of these powers of sorcery, however, were truly bizarre. The Jerseymen were accused of having limited telepathy, where they could read people's minds, but only on Fridays. Because that's how magic works.

But the strangest, and possibly the most practical power the sorcerers were accused of having was their means of transportation. Witches have broomsticks, but the sorcerers seemed to use all kinds of transport in the dark nights of Cape Breton. The locals believed the elves, or lutins, braided the manes of horses so the Jerseymen could ride them back to Jersey during the night. Nevermind that Jersey was on another continent, and across the ocean. It's magic, man! Other things the Jerseymen used to fly around on: firewood, barrels, and a door!

One local shared the story of a Jerseymen sorcerer who abducted him with a flying pig, and flew him to Jersey and back in a single night. The sorcerer warned the man that if he spoke, the pig would lose the ability to fly, because that's apparently a rule. The man didn't speak, and got a free flight out of the deal. Nobody in town believed him, which is probably the moment when Cheticamp found its limit for this kind of thing.

Some not-so-funny Instances of Sorcery 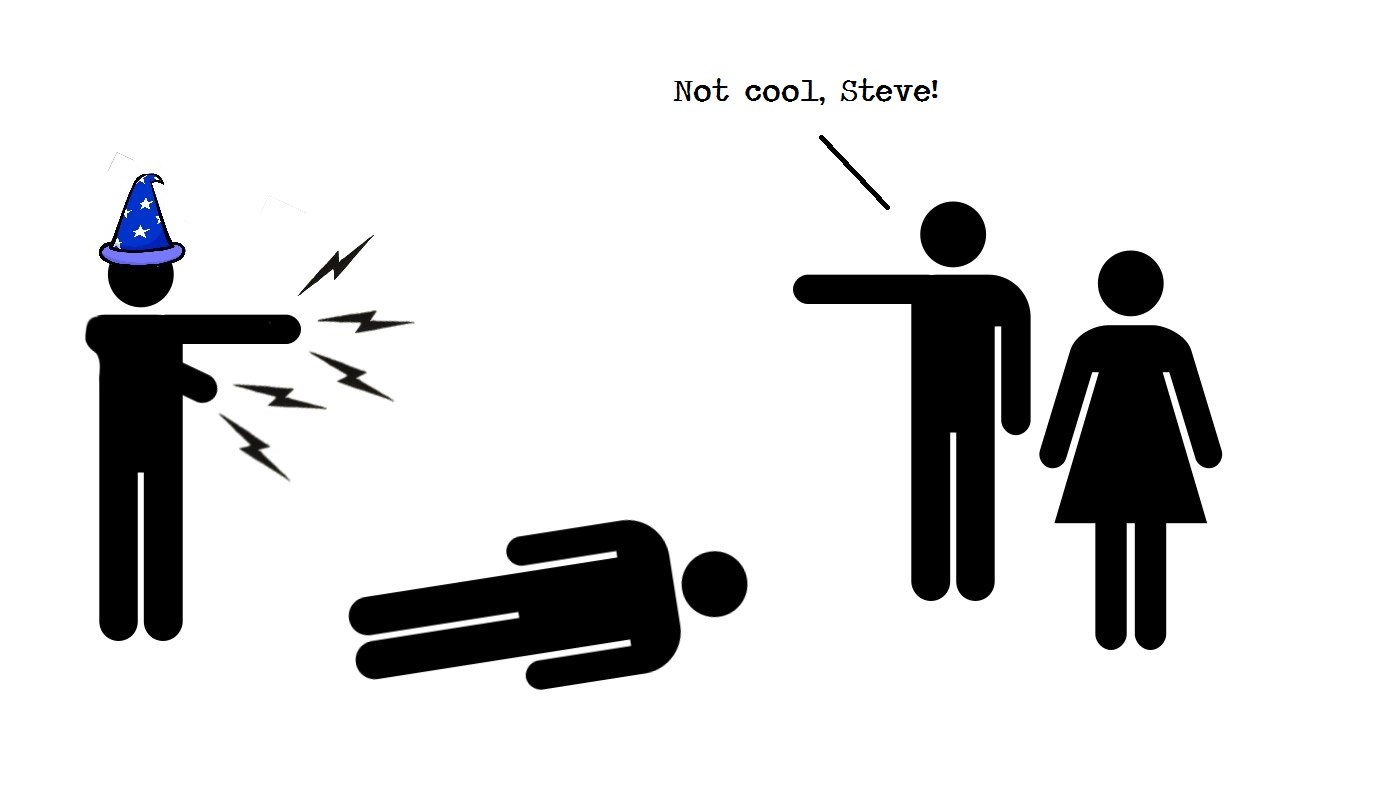 Unfortunately, not all examples of sorcery and it's punishment were so delightfully Canadian. In one instance, a man was afflicted with a "nervousness" caused by his sorceress wife. Seeing as they didn't have anti-anxiety medication at the time, the only solution was to beat himself with rocks to harm his wife. He went to the beach and began beating himself with stones, and it seemed to work, as he saw the self-harm mirrored on his wife's body. He was halfway through the process when he decided to skip the middle man and stone his wife to death. Everyone agreed that it was the correct course of action.

On multiple occasions, sorcerers afflicted local townsfolk with actual sickness. Fearing the mystical ailment, and knowing there was no worldly remedy to the sickness, people left the sufferer to their own devices. This is not recommended by medical professionals. The sufferer died. Not funny.

The Answer to Sorcery: COUNTER-SORCERY! 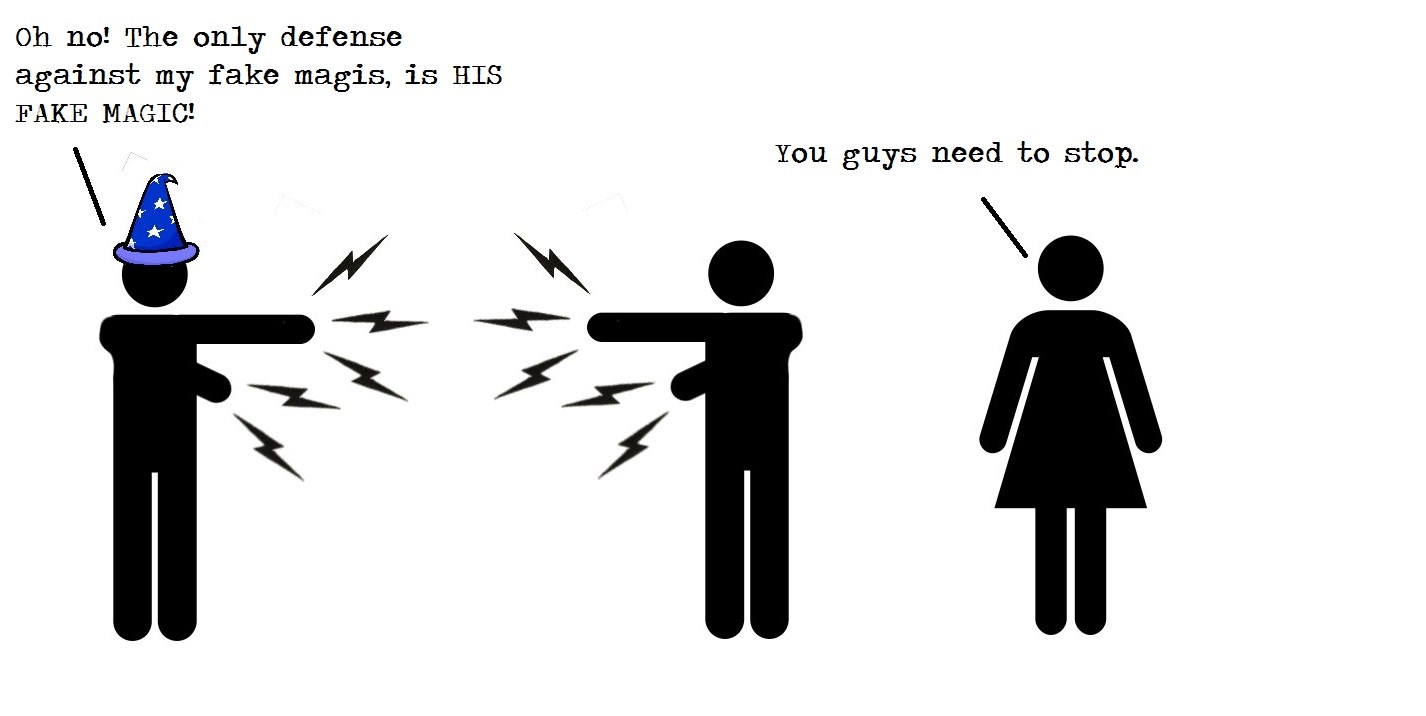 Even though many examples of sorcery in Cheticamp ended with a firm "Hey! Stop That!" others had more creative solutions.

The people of Cheticamp were firm believers in the old adage of "fighting fire with fire" and had a range of counter-sorcery options for mystical ailments. One popular solution was taking the urine of the person or animal that was cursed, putting it in a pot, adding pins to the urine, and heating the mixture up to just under boiling temperature. This did.... something. Solved the problem, I guess.

One truly inspired counter-sorcery technique involved the use of a dressed up snowman. A caretaker was cursed in some odd way, and knew the only solution was to kill the sorcerer. To do this, he made a snowman, dressed it up to look like the sorcerer, and shot it with a shotgun. Did this kill the sorcerer? Of course not! Don't be silly. You have to shoot the snowman, put a sign up telling nobody to touch it, and wait until it melts in the Spring to properly kill a sorcerer. Come springtime, the Jerseymen sorcerer fell ill and died. Both correlation and causation were proven. 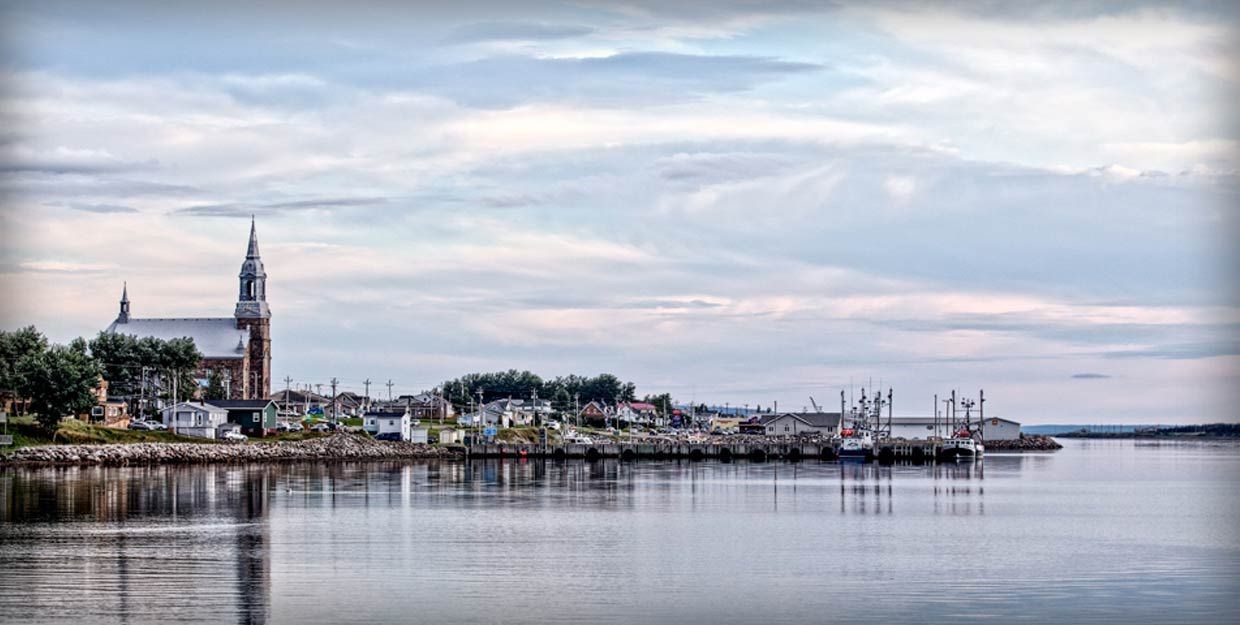 I don't write this to make fun of Cheticamp. It's a lovely town, and a fine place to spend the night when you're taking the Cabot Trail nice and slow, as one should. The tales of spells and sorcery ended sometime during the 1930's, most likely when the Jerseymen were cultural accepted and included within the community.

Most likely, if you go into any rural community that was isolated for 100 years and then found themselves facing cultural upheaval, you will also find strange tales of monsters, magic, and wild accusations. Given the right circumstances, any community is susceptible to mass-hysteria when facing these kinds of challenges.

If anything, the Cheticamp Sorcery scare only proved that Canadians have the potential for the most level-headed witch scare in history. Few people were killed or even assaulted. Most sorcerers only received a stern talking to, which compared to other witch scares, is delightful.

I would like to thank the Beaton Institute for digitally preserving Elizabeth Catherine Beaton Planetta's 1980 PhD thesis, which was the source for these stories. If you would like to read it yourself, you can find it here: http://research.library.mun.ca/7866/3/Planetta_ElizabethCatherineBeaton.pdf

I would also like to thank Lindsay Thompson for telling crazy witch stories at cast parties. I wouldn't have ever heard of this without her.