The WW2 plane on top of Jerome Mountain, Cape Breton

I'm really fascinated by stories I haven't heard that are part of the fabric of small communities but never seem to reach beyond their boundaries. In this generation so much gets lost as we are inundated with information and distracted with what is around us. We are at a loss when these stories aren't passed down, and when they are the picture becomes less and less clear. I wanted to take the time to share some of the information I've come across from the past and work to piece things together from an area that is now part of the world famous Cabot Trail.

It was the height of World War 2. The war was close to home for those on the east coast of Canada, under constant threat of torpedoes from German submarines that had already sunk several vessels, including the well-documented sinking of the SS Caribou on October 14, 1942, a ferry taking passengers from Cape Breton to Newfoundland, where 136 civilians lost their lives.

As part of what was later referred to as the Battle of the Atlantic, the Royal Canadian Air Force (RCAF) Station Summerside, in Prince Edward Island was busy training thousands of soldiers as pilots and navigators for postings overseas and reconnaissance over the north Atlantic. Known as the No. 1 General Reconnaissance School, pilots trained there for just nine weeks and navigators for four. The main training aircraft at this time was the Avro Anson, a British-designed plane initially intended to transport civilian passengers, but was heavily utilised for maritime reconnaissance missions.

Airmen beside an Anson aircraft. Photo courtesy of Wanda Wyatt.

On Sunday, August 6, 1944 an Avro Anson aircraft, with four passengers set off from PEI eastward for training. By the time they reached Cape Breton (around 3:30pm) they were under thick fog. After mowing down the tops of several trees the plane crash landed abruptly on Jerome Mountain, in the area of Cap-Rouge, Cape Breton Highlands National Park, northeast of Cheticamp.

The plane was totally ruined, with one engine lost and the other twisted, with its nose completely crushed. The pilot, First Officer W.J.Bennet of Montreal, was seriously injured, and later pronounced dead at 9:30 pm from a loss of blood. The remaining survivors, exposed to non-life threatening injuries and emotional trauma, managed to start a fire to help with location and warmth.

Communities such as Cheticamp were well organized through the war years. Being vulnerable and strategically located, local groups organised around both water and air attacks. Communities were also responsible for reporting air traffic to RCAF Station in Sydney. It is unclear if the pilots themselves reported the crash or if it was someone from the local area. Either way rescue coordination happened quickly. Several planes circled the area and dropped food and blankets. A military rescue team was organized in Sydney, which included a medical doctor. 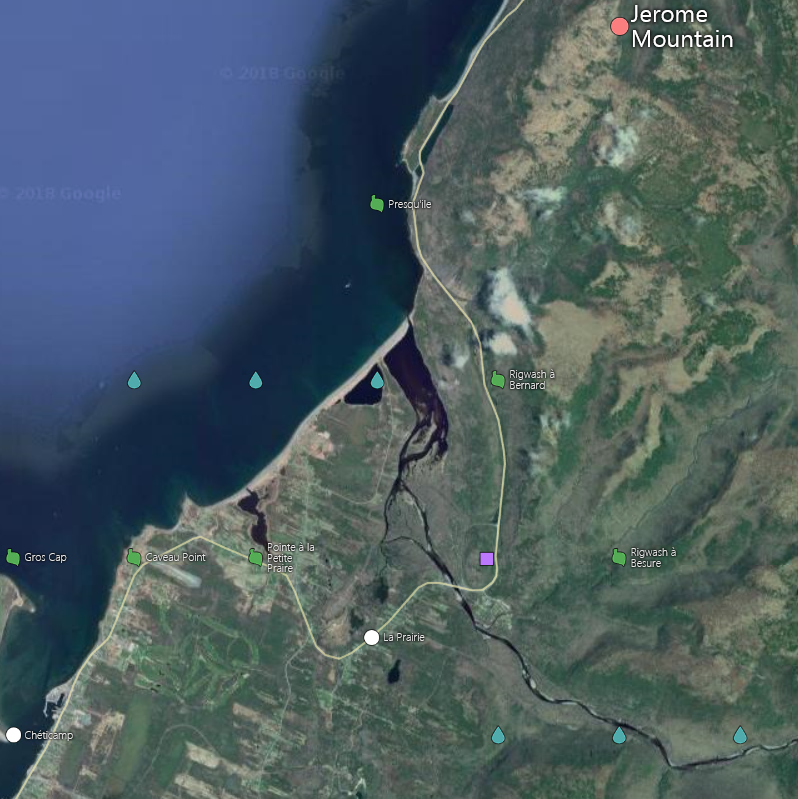 Location of Jerome Mountain in relation to Cheticamp

Through correspondence those from Cheticamp who knew the area were asked to form a volunteer rescue team to support. Johnny (J. William) Roach, National Park Warden at the time, recruited the following local people: Chris F. Aucion, Amedee Bourgois, Vincent A. Bourgeois, Amedee Romard, Charles F. Romard and Willie-Mose Chaisson. Around 6:00 am those from Sydney and Cheticamp met at Rigwash and began their ascent into the mountains. They brought stretchers and medical supplies with them.

The rescue effort was challenging. A plane had been designated to help guide the team by radio up the steep mountain in the direction of the crash site, but they almost immediately lost contact and sight of the search party. After lighting a fire the plane was able to set them in the right direction. Exhausted from the steep incline and rough terrain, the team arrived, assessed the situation and rested for the journey down the mountain. Descent, which included efforts to take out the deceased, began around 5:30 pm.

The descent was particularly treacherous, and the team finally came to the conclusion that, as night approached, they would not be able to get out of the woods with the deceased on a stretcher. It was decided that they would return for the deceased the next day. The sergeant in charge of the Sydney team, as well as the doctor, stayed with the deceased pilot overnight, and were then rescued the following day by a fresh team led by Johnny Roach and Chris Aucoin.


A few weeks later, people from Sydney came with a tractor to establish a path and look for the plane and its debris. It is unclear what had been removed and what may still be up there on Jerome Mountain. The body First Officer W.J. Bennett was returned to his family in Montreal, where he was laid to rest.

From here this story is a bit of a mystery. I heard that for several years planes would call in a crash, seeing the wreckage up top of the mountain. Also that they buried it on the first trip to clean it up or that it happened a bit later. A friend of mine mentioned that his family used to have chairs from the plane in their garage. Others have reference bits of plane in their travels to the top of the mountain. Clarence Barrett, a former park warden who has said to have trecked up there multiple times may have the best knowledge of the general location of the crash.

I talked with Alphonse Bourgeois who believes that the complete wreckage was taken down from the mountain. He talked about the story being told years ago by those involved in the rescue at Pepin Chiasson's store in Petit Etang. Pepin, who was knowledgeable about the outdoors, always resented not being asked by Johnny Roach to go up the mountain with the rescue team, telling him he was too young.

David De Veau wrote this in response to the story: "The Frenchies store which was a garage before, had one of the plane's seat, I saw it when I was a young kid. My dad used to go there to get boat engine parts repaired. To my knowledge 1 engine was brought down. What could be saved was; there was some mention that the remainder of the plane was burned & then covered in brush; to hide it from planes. When I heard the story from my dad & he mentioned it had 2 engines I assumed it was a huge plane. I've asked questions on the crash myself wanting to go find the site! It would take some time, to maybe find only a few rusted pieces of iron?".

If it is up there, it will likely remain there for a long time, in a fairly inaccessible part of the park.

Also of note is that this may have been the first example of coordinated search and rescue in Cheticamp. To this day Cheticamp has a very active search and rescue team of volunteers dedicated to helping those who have gone missing.

I would like to credit the writing of Father Ansleme Chiasson of Cheticamp, who recorded this story from his brother Willie-Mose Chaisson, who was involved in the rescue.

I would also like to acknowledge Ansleme Boudreau’s book Cheticamp Memories, which references his work in helping to coordinate the rescue efforts between Cheticamp and Sydney.

And of course thank you Andre Bourgeois for turning me on to this story and for providing much of the context. If you feel you can add to this please reach out. The more we can share the better understanding we might have of this story and many others.

Chris Bellemore is a blogger from Ontario that moved to Cape Breton Island and is logging his experiences in this strange and wonderful place. The good, the bad and the ugly. "You see, in this world there's two kinds of people, my friend: Those with loaded guns and those who dig. You dig."