I've been blogging about Cape Breton movies lately and it's made me kind of soft and I've been biting my tongue for one reason or another. The whole downtown Sydney discussion is driving me a bit nuts because calling out cynicism (if it even exists in any significant form), in my humble opinion, breeds cynicism and negativity, something we need less of! I encourage you to contribute your own thoughts to the downtown discussion.

I don't want to chime in on the Chase the Ace stuff because it is much easier to ignore it and play the lottery that has better odds. It's an interesting phenomenon but I'm just not caught up in it like other people. I sure hope people still have money to heat their house this winter. I'm sure there are a lot of people that spent money they didn't have.

Frustrated, I went to go get a coffee this morning and it's fueled something inside me that has been brewing for a while. Why has shopping become an activity that throws personal dignity and community values out the window? In CBRM it has become a necessary evil to shop. I wish I could stay home and never shop again. Why? Why? Why? 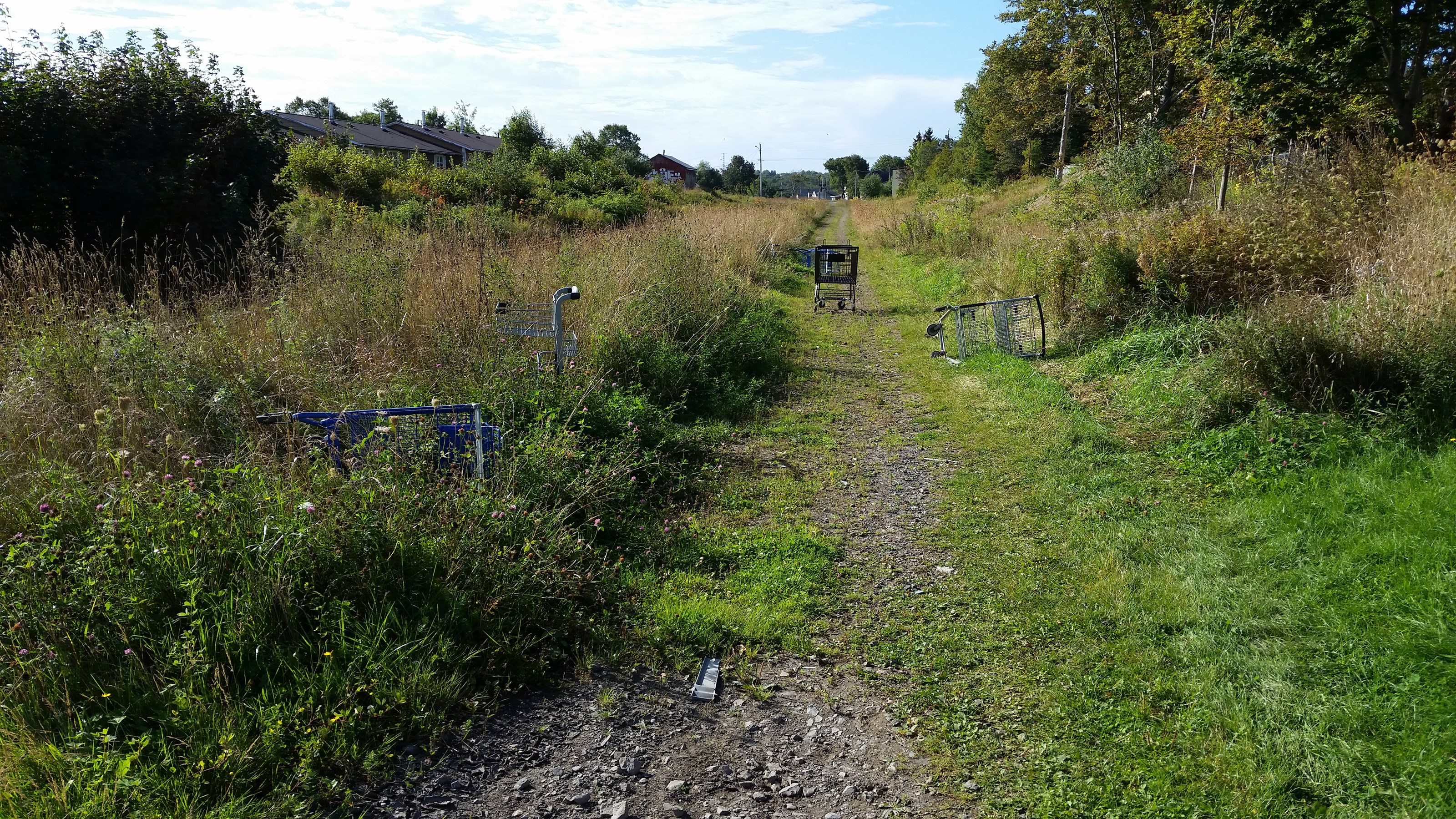 There are now officially more Walmart, Superstore and Sobeys carts in North Sydney in fields, nooks and crannies than at the stores themselves. I haven't done the math but it sure seems that way. On my way to coffee I counted 24 shopping carts in different places. I guess the assumption is that some people are elderly and not well off so they take their groceries to their home in carts. I'm just not buying it. Why wouldn't they take them back? They have to go regularly. And another thing: why aren't these companies collecting them?  Each cart is worth at least $100. Wouldn't it be of benefit to them to have them back instead of degrading the streets of North Sydney? The whole thing boggles the mind. It makes for a great post-apocalyptic backdrop for some future sci-fi movie where everyone is dead and gone, but does little to demonstrate that people should live here and live a healthy lifestyle. 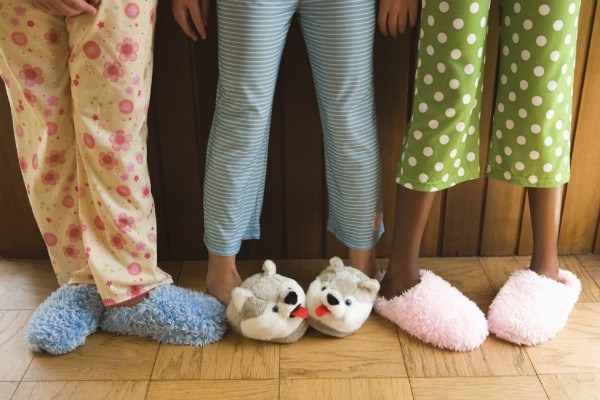 OK, this doesn't happen just here, and it is a fairly minor infraction of public decency compared to things that could be much worse. But it happens and frequently. This is not something that our foremothers and fathers had to put up with. It's a new trend. I'm not materialistic in any way, and respect and encourage people to dress comfortable. But have these people really given up on life completely? I feel overdressed going to the grocery store in jeans. We can thank our lucky stars for yoga pants or we would all be peer pressured into wearing pajamas all day long. Why not dress up in a costume? Wear a bunny suit or something... 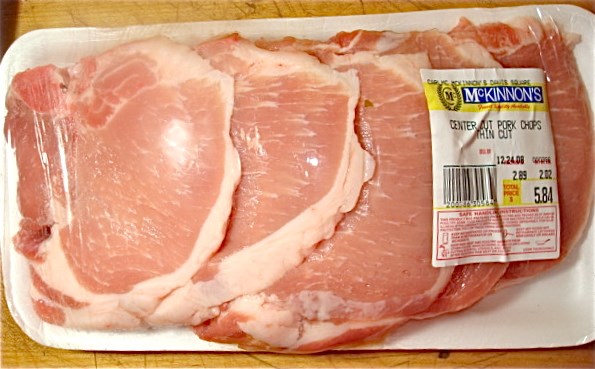 Has anyone else witnessed this? I've been to the grocery store on a number of occasions where a large group flocks around the door awaiting a new delivery of pork chops, chicken or other meat product and all of the sudden all hell breaks loose. There is some pushing, lots of anxiety and "survival of the fittest" jockeying over packs of meat. It's like a pack of wild dogs. I was compelled to yell "security!!" one time when I witnessed this phenomenon. This removed people from their bizarre pack mentality as they came back to reality and realized things were getting a bit out of control. All was calm again. Now I know why a Walmart employee was trampled to death in the US on Black Friday. Really, there are enough pork chops to go around everyone!

4. People parking at the door of the store with the motor running. 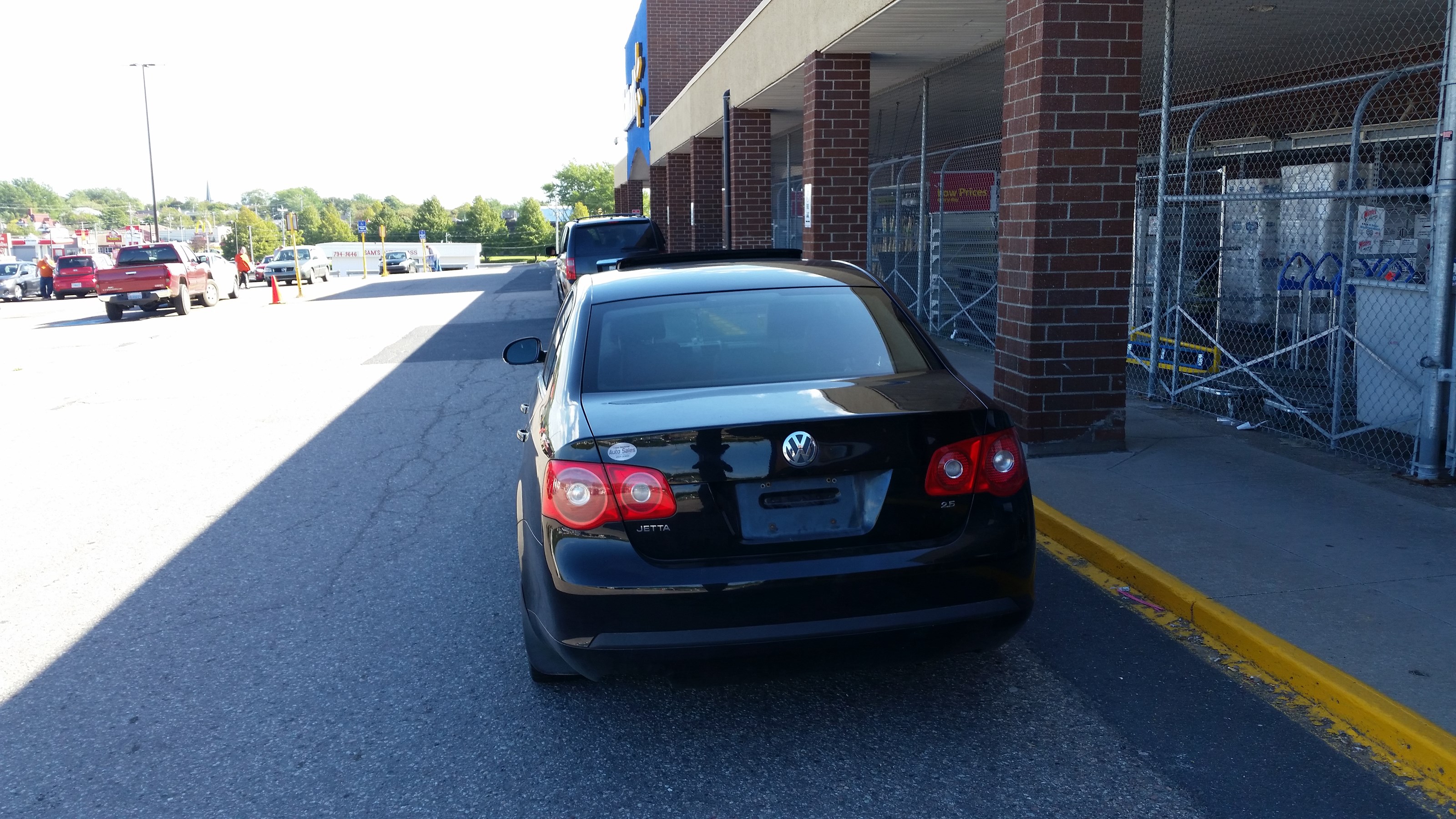 I've been observing the parking situation at the local Wal-Mart. So, there are accessibility spots, spots for pregnant mothers and other spots. Then there is a restricted area along the sidewalk and doors of the store. Cars are all lined up there and it's become a designated spot for obnoxious people that don't care. Sometimes people are in the cars with the motors running. Sometimes they are not in them at all. Almost everyone I see in these cars are younger. So what is the issue with parking in the normal parking area, instead of in the fire lane of the store blocking pedestrians from crossing? I know that everyone thinks it's a treat for some reason to park close to a store. I always park farther away because I have little kids with me sometimes and it is easier to open doors when there isn't anyone around. I don't mind walking. Is it that much more strain on your legs? We could leave some of the close spaces for elderly people if we were decent human beings. It would be a real swell thing to do. After all, these older people have dignity and refuse to park illegally at the door.

And idling the car, like it is the 1970s. If you are looking to destroy the world at least drive a Volkswagon (like the one pictured above illegally parking in North Sydney). Then there are those people who think they have a fancy enough car to park sideways in two spaces. Don't get me started. 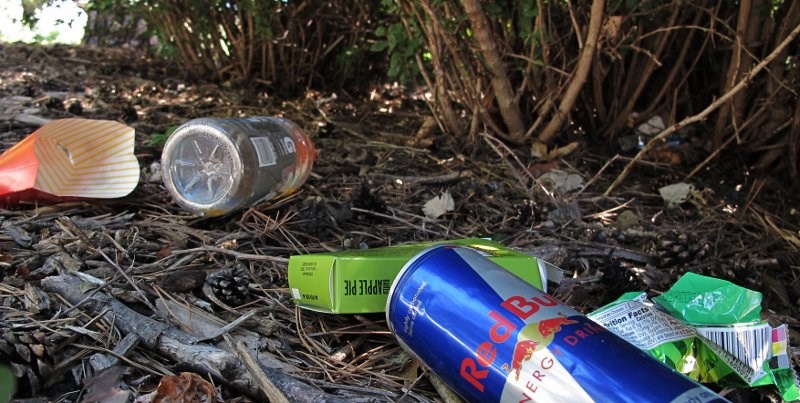 Shopping etiquette doesn't end when you pay for something and drive away. Litter is, without question, a major problem in CBRM. It's as though we have come to accept that our streets are filthy. And it isn't just a sign of poverty-stricken Cape Breton. All this stuff is purchased after all. Even coffee snobs in fancy cars and trucks litter all over the place. So why are people contributing to the litter problem? A lack of community pride?

Why don't you see this type of thing in PEI? There isn't much difference between populations, infrastructure and such. I hate comparing Cape Breton to anything else because it is special, but this is not seen in other places to this extent. It is really problematic.

Although personal responsibility is at the heart of this, one thing that I have noticed is the growing decline in garbage facilities at convenience stores and other establishments.  Garbage is a big cost and many companies, organizations and municipalities have tried to cut back by taking garbage cans away, leaving Tim Hortons and McDonalds to handle the lion's share. I'm not sure how much the municipality is investing in street clean-up as well. There are annual volunteer clean-ups but one spring clean-up doesn't really put a dent in things around here.

It would be so nice to see more shaming opportunities and ideas around littering, if that's the only thing that works. We could look back to our rich history and bring the stocks or pillory back, or just simply make people walk around barefoot as punishment. Or we could try to have the local police crack down and post people's names in the paper that are caught littering. Dealing with this amount of litter should not be the norm. It's safe to say that people that litter don't love Cape Breton like we do.

I know I'm sounding a bit high and mighty here. I've accused other writers of having a monstrous ego and I'm not completely removed from it myself. One thing I have considered is trying some or all of these things just to see how it would make me feel about myself and experience what other people go through. I could drive to Wal-Mart in my pajamas, leave my car running at the door, take a cart, bring it to my house, leave it on my lawn, and throw a bunch of stuff out on the street (to go along with the other garbage). I wouldn't feel great, but it certainly ensure that I'm not getting all preachy, high and mighty. And maybe it would bring awareness to how crazy some of these things are, and perhaps a call to action - something that is seriously lacking from blogs like this where people complain, there are lots of solutions but nothing is done.

Cape Breton really is a special place with a great community, but often we oversee these things due to being isolated and feeling hopeless. I won't get into people being cynical. I'd rather say that there is hope. I get a sense it wasn't always this way, so what has changed? It is always nice to relish small victories like schools picking up litter, or people holding the door open for an elderly person, or people paying for the person's coffee behind them in line. I dream of a better place where people are truly impressed with what we have to offer. I'm not asking for much. Just a little less litter and some more pride in our community.

Maybe these things don't get to you like they get to me. I was due for a tirade. Everyone has some sort of bee in their bonnet. Some people even dislike whistler tips. The whistles go wooooooo!!!

My music, mostly about how a women did me wrong and other injustices in this cruel world:
https://soundcloud.com/crispbellemono