Meet the Cape Bretoner Who Paints His Own Lines #RodPoli

In getting to know Rod Gale, you might think he is misunderstood. But that would be precisely the opposite of what he is.

Although there are folks that might not like what he has to say, or how he says it, it’s a good bet that his message will be delivered in Cape Breton real talk.

As a straightforward guy, he doesn’t leave much room for confusion. So it’s easier to dodge him than pretend you don’t understand his concerns. And that’s precisely what some elected officials sometimes try to do.

Much of what he puts out on social media is uncensored. But it’s not the type of NSFW stuff you can easily dismiss. Rod has something that many others dabbling in social media activism don’t.

He has objectives. He focuses on those objectives. And he’s probably more persistent than you.

You won’t just ignore a few tweets from him and convince him to give up. If you’re a journalist or an elected official he’s reaching out to - with either a request or a critique - you’ll hear from him again.

What’s the good of persistence without results?

Rod gets results. It's a combination of his unwillingness to give in and his instinct in deciding which levers to pull. 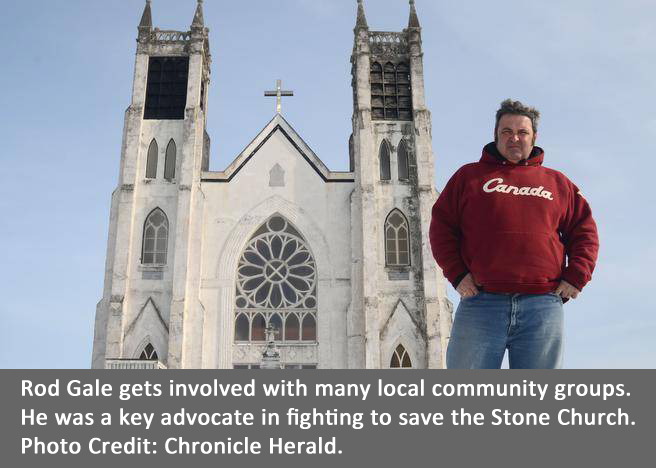 He isn’t your typical social media agitator, though he’s often mistaken for one. When concerned citizens met to discuss the doctor crisis in Cape Breton, Rod showed up to live tweet it. He’s a board member, DJ, and producer for Caper Radio who has spent 20 plus years in the Cape Breton indie music scene doing marketing and promotions. He’s been a board member for the Stone Church Restoration Society, and billed himself as a “Social Media Samurai” for the group trying to save the “Royal Cape Breton Yacht Club”.

The title seems consistent with his approach. Sharp edges and precision cuts, all done with an inherent sense of honour. It's a conflict, but it's one that means something to him.

When it comes to community issues, Rod’s always one of the first to bring attention and focus. Our more saavy local media get the heads up from his tweets, emails, or calls. He sets the word in motion. And he rattles the cage of every elected official that should be focusing attention on an unresolved or new issue.

How can a guy who will tell you he’s just a typical Cape Breton construction worker and community man be such a catalyst?

Rod is a construction worker. He flies back and forth out West like so many of our tradesmen and tradeswomen. And, not surprisingly, he’s a union man who expresses immense respect for his coworkers and fellow union members.

But rewind the resume back just a little bit, and you’ll start to see the origins of #rodpoli.

By the way, that’s his social media hashtag standing for “Rod” and “Politics”. It’s a witty spin on the popular local #cbpoli and #nspoli hashtags - and a direct indication of Rod’s self awareness of exactly what he’s up to.

Think of it more as a shot across the bow than a personal brand. He’s motivated by making a difference, but there isn’t any indication that it’s about ego. 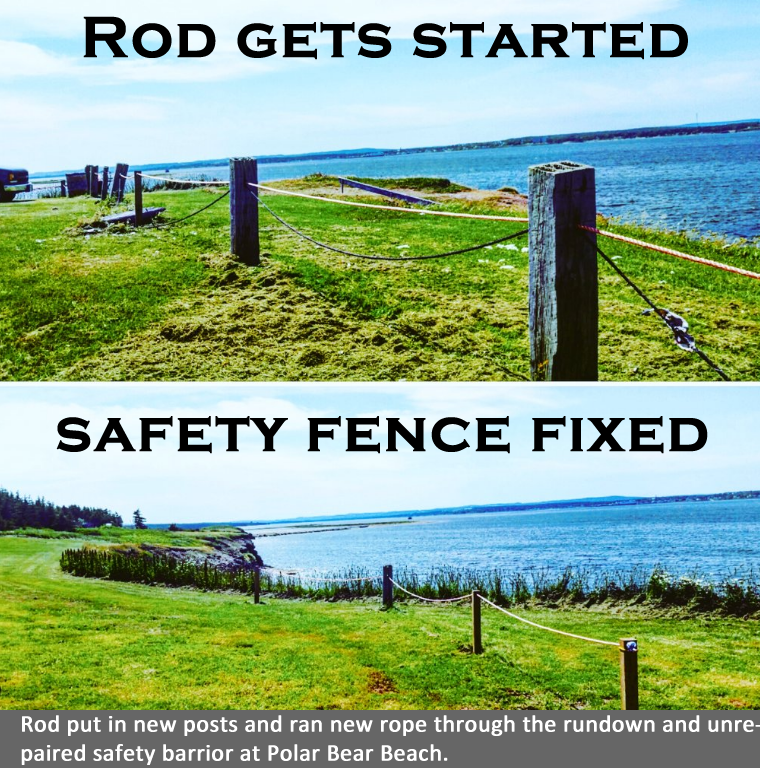 Back before the days of Rod getting into the trades, he completed his Bachelor of Arts Degree at St. Francis Xavier University, and followed it up studying Broadcast Journalism at Loyalist College.

Half a dozen years later, his dynamic nature revealed itself again when he enrolled in the Culinary Arts at NSCC. If you think that was just about getting him ready to scramble eggs, it might scramble your brain to learn that he decided his graduation project would be recreating the “final first class meal on board the Titanic”. 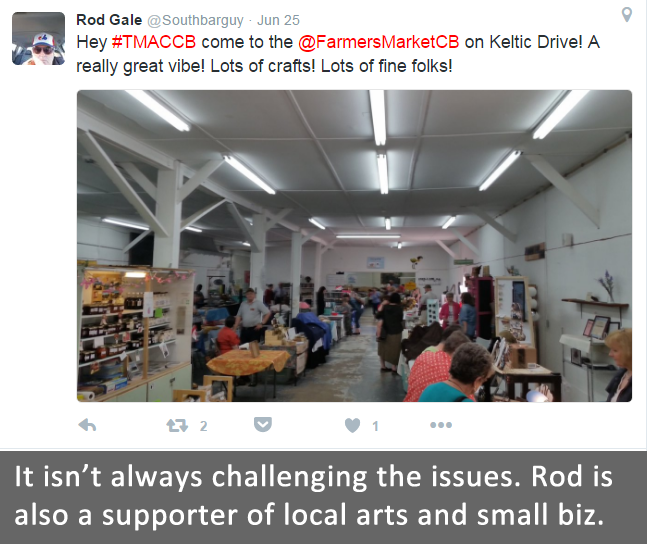 Maybe we could just wrap this up by saying “And now you know the rest of the story.”

No, we’re not quite done yet. So let’s just say: Now you know why a man with such persistence on Social Media isn’t just your typical disgruntled guy with a smartphone and a Twitter account.

All of that influence from his background is leveraged into his style. But he departed from rigidity and formality. He breaks rules. He sacrifices politeness for getting to the point. And he doesn’t wear kid gloves.

He knows what the best print journalists who aren’t trying to win Pulitzers know:

Say it plainly. Get your point across. Don’t try to impress with uppity language.

Don’t go with the long and impressive-sounding, yet empty, and almost-completely-meaningless sentences (aka bureaucrat talk).

That’s what you’d expect from the type of folks who know if they talk long enough, many people will forget how little they actually said.

Rod would have condensed everything I just said in the last three paragraphs into two words: No Bull.

So, yes, he writes his own lines, and gets right to it.  What we might think is off-the-cuff at first glance, is really more of Rod’s own strategic style of #RodPoli.

Quickly get to the point; stay on message; pull no punches; follow up persistently; and target comments directly at the ones whose job it is to deal with it.

If you want to ignore him, you’re going to have to be very good at it, because Rod will spark your attention when he wants it.

Paints His Own Lines?

Yes, he paints them too. If you were following Rod via his Twitter account this week, you would know what that means. 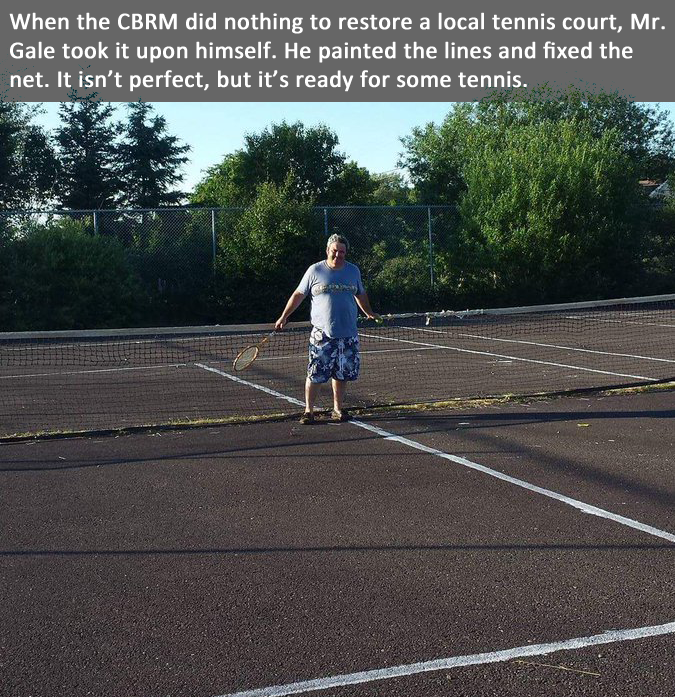 At present, he’s back in South Bar, waiting for his next call out to work. But he won’t have idle hands until the phone rings.

This past week, he decided that issues that aren’t getting through to his local CBRM councillor, Jim MacLeod, will just have to be done anyway.

So Rod painted the lines at a local unmaintained tennis court and restored the net.

It’s now ready for kids and adults alike to come and have some fun swinging a racket.

But he didn’t stop there. Down at the area known as Polar Bear Beach, Rod took it upon himself to replace some safety posts and barrier rope at the edge of the embankment. He cut the unmowed grass. And he delivered his own 45-gallon drum to serve as a trashcan.

Never one to miss a public relations opportunity, he branded that trash can as his #rodpoli hashtag with a quick spray job and then took it to social media.

Then he let the CBRM and his district councillor, Jim MacLeod, know what he did to solve the problem they didn’t acknowledge.

He definitely paints his own lines. And he does it all with his personal fire-at-will strategic approach.

Like him or not, Rod Gale is an unrelenting Cape Breton patriot who cares about his community. And he’s going to hold elected representatives accountable in his own style. And that’s a style that is very difficult to ignore.

"I am a Cape Bretoner first and always!" - Rod Gale, South Bar

I followed up with Rod on Thursday to ask if he heard back from the CBRM on his latest request. He wanted them to mow an overrun lot. He told me that they didn't bother to respond to him. They just showed up and mowed without giving him a heads up or letting him know.

It didn't bother Rod. It's about results for him, not pats on the back.The cement on his new posts are set. The newly painted lines on the tennis court are dry. And now the grass is cut.

His request was heard, and with his leadership, the community now looks a little bit better today. And that's mostly because of Mr. Gale's effort to do most of the work himself. But it's also because he showcased the conditions of neglect the CBRM was leaving for the taxpayers of South Bar. And, as it turns out, that can be quite effective with an election coming up in just a few months.

Posted by Joe Ward
Share your news and events for free on goCapeBreton.com
SHOW ME HOW